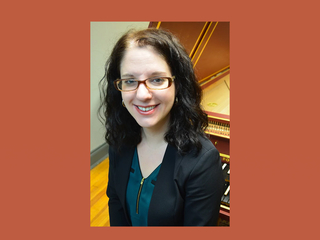 Discussions of gender in the Western classical music canon have brought forth a tremendous amount of feminist scholarship during the past thirty years, and Philip Ewell’s monumental address at the 2019 annual meeting of the Society for Music Theory on “Music Theory and the White Racial Frame”  called out the discipline’s entrenched whiteness and lack of equal representation within the music theory canon.  An example of this inequity can be found in the seven most-used music theory textbooks in the United States. These textbooks contain 2930 musical examples of which 1.67% are by non-white composers, and just 2.15% are by women. To address racial and gender imbalances within music theory, Adjunct Faculty Paula Maust committed herself to diversifying and expanding the musical examples used in her theory classes. Her work focused on shedding light on under-represented composers and their music to provide students with a more comprehensive picture of the broad spectrum of humanity that contributed to the richness of Western classical music. To help educators begin the important step of diversifying their own curricula, she created Expanding the Music Theory Canon, an extensive database of several hundred musical examples covering topics studied in most undergraduate theory sequences. This is the first open-source platform of this magnitude and scope tailored specifically to theory classroom instructors. By amplifying the voices of forgotten historical figures, Dr. Maust hopes to both expand the canon and revise the narrative concerning the valuable contributions of women and BIPoC composers from the common practice era (1650-1900).
Dr. Maust was assisted by music composition majors Jeffrey Martin and Kathryn Blake and music technology major Garret Walton. Jeffrey engraved the musical excerpts and Kathryn is curating a selection of pieces with Dr. Maust that employ twentieth-century compositional techniques from I Resound Press this spring. Garret Walton assisted with data entry and editing recordings.
Congratulations to Dr. Maust, Jeffery, Kathryn, and Garret on this incredible resource!
0 Comments (requires login)