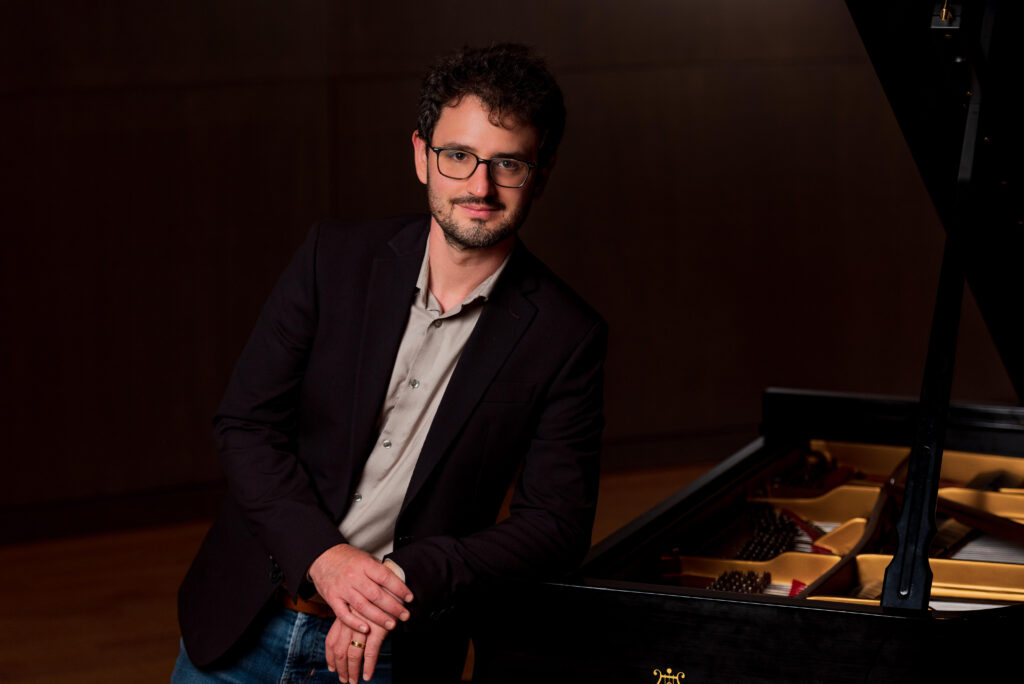 Daniel Pesca, pianist and composer, is both a passionate advocate for contemporary music and a committed performer of the classical repertoire.

Dr. Pesca has played the world premieres of over one hundred solo and chamber works, many of which were composed for him. In the process, he has shared the stage with many leading new music ensembles, including Ensemble Signal, the Pittsburgh New Music Ensemble, the Aspen Contemporary Ensemble, and Ensemble Dal Niente. In recent years, Daniel has performed at the Library of Congress, the Kennedy Center, Columbia University’s Miller Theatre, twice on Chicago’s Dame Myra Hess Concerts, at June in Buffalo, and at other festivals devoted to contemporary music in Spain, Italy, Greece, and Vermont.

Since fall 2019, Dr. Pesca is Assistant Professor of Piano at University of Maryland Baltimore County. Prior to his appointment at UMBC, Dr. Pesca was Artist-in-Residence, Director of the Chamber Music Program, and Lecturer in the Department of Music at the University of Chicago from 2016–2019. At UChicago, Dr. Pesca collaborated frequently with faculty and student composers, including Sam Pluta, Augusta Read Thomas, Aaron Helgeson, and Tonia Ko. He also performed with ensembles-in-residence Imani Winds and Spektral Quartet, and presented duo recitals with Paul Dwyer (assistant principal cellist, Lyric Opera of Chicago Orchestra).

Dr. Pesca is a founding member of the Grossman Ensemble, the ensemble-in-residence at the Chicago Center for Contemporary Composition at the University of Chicago. In its first two seasons, the Grossman Ensemble premiered works by Shulamit Ran, Tania Leon, Kate Soper, Chen Yi, and Paula Mattheson, among others. The ensemble released its first CD, The Fountain of Time, in August 2020.

Among his past concerto credits are performances of the Elliott Carter Double Concerto at Carnegie Hall, the Aspen Music Festival, and with Eastman’s Musica Nova. Carlos Sanchez-Gutierrez composed two large works with solo parts for Dr. Pesca: Diaries, premiered with the Orchestra of the League of Composers and recorded with the Eastman BroadBand in 2012; and New Short Stories, premiered with the Grossman Ensemble in 2019. His other concerto appearances include works by Messiaen, Berg, Robert Morris, Bernstein, and Ricardo Zohn-Muldoon with the University of Michigan Symphony Band, the Slee Sinfonietta, the Eastman Wind Ensemble, the University of Chicago Symphony Orchestra, and the Oberlin Sinfonietta. He looks forward to performing Messiaen’s 90-minute Des canyons aux étoiles… in Pittsburgh in June 2021.

Dr. Pesca is a founding member and co-director of the Zohn Collective, established in 2017 with violinist Hanna Hurwitz (Denison), guitarist Dieter Hennings (University of Kentucky), conductor Tim Weiss (Oberlin), and composer Ricardo Zohn-Muldoon (Eastman). The ensemble’s projects so far include a major opera production in Guadalajara, Mexico; residencies at Notre Dame University and Northern Kentucky University; and a Midwest tour of Oberlin College, the Cleveland Museum of Art, and International House at the University of Chicago. The ensemble looks forward to projects at Vanderbilt University and the Beijing Modern Music Festival in 2021. The collective has garnered support from the National Endowment for the Arts, the Ditson Fund at Columbia University, New Music USA, and US Artists International, among others.

Dr. Pesca has a thirteen-year duo partnership with flutist Sarah Frisof (University of Maryland—College Park). Together, Dr. Pesca and Dr. Frisof have performed over forty recitals, at venues such as the Interlochen Center for the Arts, the Arts Club of Washington, and universities, conservatories, and conferences across the country. Their recording of the music of Joseph Schwantner was released on Centaur Records in July 2016, to critical acclaim. Their second CD, Beauty Crying Forth: Flute Music by Women Across Time, appeared on New Focus Recordings in August 2020.

Among Dr. Pesca’s recent works are a sextet commissioned by the American Wild Ensemble, which was performed over a dozen times at national parks across the country and is recorded on the ensemble’s debut album; a song cycle commissioned in commemoration of the 50th anniversary of the first manned lunar landing, which was premiered under the Saturn V rocket at the U.S. Space and Rocket Center in Huntsville, Alabama; another song cycle for tenor Zach Finkelstein, setting poetry by Irving Feldman; a piece for cellist Audrey Q. Snyder, created in collaboration with video artist Xuan; and a solo work for Paul Dwyer, part of his project COVID-19: Contagious Solitude. These projects have been supported by grants from New Music USA and the NEA, among others.

Dr. Pesca holds a doctorate from the Eastman School of Music, where he led a class on contemporary keyboard music for four years, played a leading role in the new music collective OSSIA, and studied piano with Nelita True. He also studied piano with Logan Skelton and Rita Sloan. He counts Robert Morris, David Liptak, and Betsy Jolas among his composition mentors, and he has taken lessons and masterclasses with Hans Abrahamsen, Chaya Czernowin, and Louis Andriessen. In addition to his appointments at UMBC and UChicago, he has held teaching positions at Ithaca College, Syracuse University, and Northeastern Illinois University.