The Department of Music presents Balance Campaign, a contemporary classical ensemble dedicated to commissioning and performing new works by underrepresented women, LGBTQ+, and minority composers, as well as composers with connections to the ensemble's home in the Washington, DC area. Their program will include works by UMBC student composers and works by Alyssa Weinburg and Christopher Cerrone.
Since their start in 2017, the ensemble has produced local and touring concerts at Atlas Performing Arts Center, AMP by Strathmore, University of Maryland Baltimore County, University of District of Columbia, ShapeShifter Lab, Fordham University, and countless churches, homes, and community spaces.
As the District New Music Coalition's 2019 Ensemble-in-Residence, Balance Campaign forged connections with audiences and musicians by performing a series of concerts featuring the work of living composers in the D.C. metro area. In summer 2019, Balance Campaign was awarded a residency at the Avaloch Farm Music Institute, where they collaborated with composer Nathan Lincoln de Cusatis on their first commission, ANIMAL, which premiered October 2019 at Fordham University during their Northeast ‘DESTRUCTION’ Tour. They are currently working closely with Alexandra Bryant-Tavani on a new commission to be premiered in 2023.
Tickets 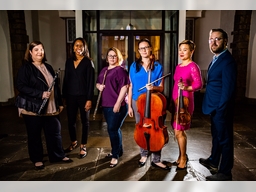