Inscape Chamber Orchestra returns to UMBC to perform four works, including UMBC professor Linda Dusman‘s Mother of Exiles, written for Inscape in 2019 and heard now in a new revision by the composer. Quoting lullabies from Syria, Nigeria, and the Andes region, the work questions how disperate voices might still join together to form that American hope of a more perfect union. Also on the program are two new works written for Inscape by composers Zach Gulaboff Davis and Patrick Andrew Thompson — Cascade and And Into The Fire — that explore the virtuosity and color of the ensemble.
The program concludes with the much awaited world premiere performance of David Plylar‘s masterful transcription of Igor Stravinsky‘s Petrushka. Completed in 2015 and released directly to an album in 2016, this transcription of the full ballet vividly captures three puppets brought to life during the Shrovetide Fair.
Program:
Patrick Andrew Thompson: And Into The Fire (world premiere)
Linda Dusman: Mother of Exiles
Zach Gulaboff Davis: Cascade (world premiere)
Igor Stravinsky: Petrushka (trans. David Plylar)
Founded in 2004 by artistic director Richard Scerbo, Inscape Chamber Orchestra pushes the boundaries of classical music in riveting performances that reach across genres and generations, and transcend the confines of the traditional classical concert experience.
With its flexible roster and unique brand of programming, this critically acclaimed, GRAMMY-nominated group of musicians has quickly established itself as one of the premier performing ensembles in the Washington, D.C. region and beyond.
Tickets 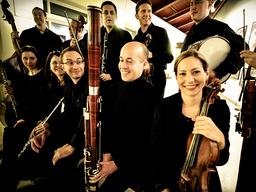