The Inscape Chamber Orchestra returns to UMBC to perform works by Olivier Messiaen and Arnold Schoenberg.
In solidarity with all people that are subject to oppression, Inscape performs one of the most iconic works of the 20th century. Olivier Messiaen’s Quatuor pour la fin du temps (Quartet for the End of Time) was written while the composer was held in a prisoner of war camp in Görlitz, Germany (now Zgorzelec, Poland) during World War II. The quartet, featuring clarinet, violin, cello, and piano — instruments that were available to the prisoners — received its first performance in the camp in 1941.
The program also features Arnold Schoenberg’s Ein Stelldichein (1905), found among the composer’s works after his death, and not premiered until 1968.
Tickets
$15 general admission
$10 seniors
$5 students
Free for UMBC music majors and music faculty/staff

Ticket availability will be announced. 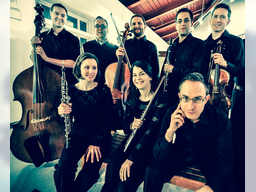