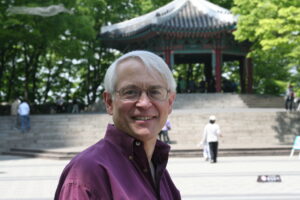 Dr. James Mobberley is Curators’ Distinguished Emeritus Professor of Music at the UMKC Conservatory, where he was a member of the faculty from 1983-2019. He is a primary architect of the composition program, which has grown to include 50+ composition majors, from freshman through doctoral levels. He is much in demand as a guest composer, with lectures, master classes and workshops in Hong Kong, Taiwan, Thailand, China, and Korea. Venues in the U.S. include Stanford University, Yale University, the University of California-Berkeley, Indiana University, the Peabody Conservatory, the University of Texas at Austin, and over forty other schools, festivals, and conferences.

Rome Prize winner and Guggenheim Fellow Mobberley’s works span many media, from orchestra and electro-acoustic music to music for dance, film, and video. His works have received over 1400 performances worldwide.

He has served on professional panels and nominating committees for organizations that include the American Academy in Rome, the Fromm Foundation, the Barlow Endowment, the National Endowment for the Arts, the Civitella Ranieri Center, the Fulbright Fellowships, New Music USA, the MacDowell Colony, the MidAtlantic Arts Foundation, the Bush Foundation, the McKnight Foundation, I-Park, the Fisher Competition and the Missouri Arts Council.

Two dozen recordings feature his music, including the Black Canyon, Bridge, Capstone, Centaur, Everglade, and Troppa Note labels, as well as an all-Mobberley recording on the Albany label recorded by the Czech National Symphony. Many of his works are available for listening on http://www.soundcloud.com/jim-mobberley.

His music is primarily self-distributed, with an additional publication by Edipan (Rome).