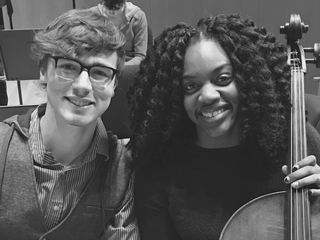 Samuel Winnie's (B.A. in Composition '16) Romani Lachrymose for solo cello and electronics has been selected to be performed at the National Student Electronic Music Event (N_SEME).  The piece will be performed at the conference by Chanel Whitehead (B.A. in Performance '17), who premiered the work in Fall 2015.  N_SEME is an annual conference devoted to showcasing electronic and electroacoustic compositions and research by undergraduate and graduate students from around the country.  Featured presentations at N_SEME 2016 include a keynote lecture by internationally award-winning composer Panayotis Kokoras and concerts by acclaimed electroacoustic musicians Elizabeth McNutt and Andrew May.  This year's N_SEME will be held at the University of Oklahoma's School of Music in Norman, OK on March 26-27.
Romani Lachrymose was composed in 2013 as a soundtrack to a dance by UMBC student Rachel Lum and later adapted for live cello and electronics. The piece for solo cello and electronics is an exploration of the expressive and improvisatory nature of the Romani style. This tone poem on the concept of lachrymose places listeners directly into the mind of someone spiraling into depression. The use of electronics in this piece adds a new dimension, engulfing listeners in sounds of lament as achievable only on the cello.  Romani Lachrymose was premiered by Chanel Whitehead on November 6, 2015 on Samuel Winnie's senior composition recital in the Linehan Concert Hall at UMBC.
Congratulations to Samuel and Chanel on this fantastic opportunity!
0 Comments (requires login)