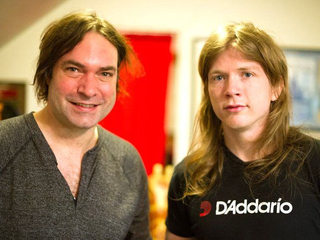 Joey Mitchell (Music '09) is set to tour New York State with his band, Swampcandy in February.  Natively based in Annapolis, Swampcandy is a duo with Mitchell playing bass and kick drum and his musical partner Ruben Dobbs on lead vocals, mandolin, and guitar.  Their musical style is heavily influenced by primitive blues and they have toured all over the US and the UK.
Their accolades as a band include 250+ shows in one year, winning the 2014 Floydfest 'On The Rise' competition, their latest album, Midnight Creep/Noonday Stomp, being ranked in the NBT Music Radio's Top 150, and receiving Radio Flag's Radio Star Award for Best Artist in Fall 2014.
Congratulations to Swampcandy and their success, we look forward to hearing more about their prosperous career!
Source:
http://www.swampcandy.com/
http://www.cdbaby.com/Artist/Swampcandy
http://www.pressrepublican.com/news/swampcandy-blues-duo-best-heard-live/article_1d0bc5ec-5d39-5195-bdbb-b5fc189c7bd3.html
Photo credit: Press Republican
Tags: alumni
0 Comments (requires login)