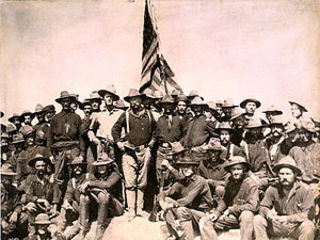 Podcast by Lydia Clemens and Howard Ablat.
Music was crucial during the brief Spanish-American War as a means of wartime propaganda and promotion, and of soldier recruitment. It also helped soldiers cope with lack of preparation and terrible conditions as they commiserated over terrible food, inappropriate clothing, and a war that wasn't as advertised.
Tags: music podcast
0 Comments (requires login)