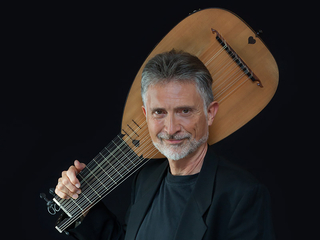 This Sunday, we will be welcoming Ron McFarlane and members of the Baltimore Classical Guitar Society for a masterclass in the music box.  The masterclass will feature students of Jonathan Zwi's guitar studio.
GRAMMY nominated lutenist, Ronn McFarlane strives to bring the lute the most popularinstrument of the Renaissance into today’s musical mainstream and make it accessible to a wider audience.Born in West Virginia, Ronn grew up in Maryland. At thirteen, upon hearing “Wipeout” by the Surfaris, he fell madly in love with music and taught himself to play on a “cranky sixteen dollar steel string guitar.” Ronn kept at it, playing blues and rock music on the electric guitar while
studying classical guitar. He graduated with honors from Shenandoah Conservatory and continued guitar studies at Peabody Conservatory before turning his full attention and energy to the lute in 1978. The next year, Mr. McFarlane began to perform solo recitals on the lute and became a member of the Baltimore Consort. Since then, he has toured throughout the United
States, Canada and Europe with the Baltimore Consort and as a soloist.
McFarlane was a faculty member of the Peabody Conservatory from 1984 to 1995, teaching lute and lute-related subjects. In 1996, Mr. McFarlane was awarded an honorary Doctorate of Music from Shenandoah Conservatory for his achievements in bringing the lute and its music to the
world. He has over 40 recordings on the Dorian/Sono Luminus label, including solo albums, lute duets, flute & lute duets, lute songs, the complete lute music of Vivaldi, a collection of Elizabethan lute music and poetry, and recordings with the Baltimore Consort.
Ronn has composed new music for the lute, building on the tradition of the lutenist/composers of past centuries. His original compositions are the focus of his solo CD, Indigo Road, which received a GRAMMY Award Nomination for Best Classical Crossover Album of 2009. In 2010 Ronn founded Ayreheart, an ensemble brought together to perform new compositions as well as early music. Ayreheart’s first CD release, One Morning, consists of all original music by Ronn
McFarlane. Ayreheart’s 2016 release, Barley Moon, blends folk music and art music from Renaissance and Medieval England, Scotland and Wales. Ronn’s newest solo album, The Celtic Lute, released in 2018, features his arrangements of traditional Scottish and Irish music from the 17th and 18th centuries.
0 Comments (requires login)