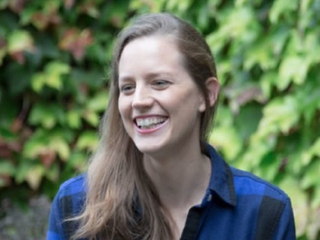 Tonight, music alumna Kimberly Patrick (music technology '08), will be recognized for her professional achievements at UMBC's 2019 Alumni Awards.  Congratulations Kim, we are incredibly proud of you! ⁠

Kimberly Patrick is an Emmy-nominated sound editor and foley artist for film and television. While studying music technology at UMBC, Kim became interested in film sound. After completing an internship at the Walt Disney World Theme Park she was admitted to the University of Southern California Cinematic Arts graduate film program and completed an MFA in Film and Television Production with an emphasis in sound in 2012.⁠⁠
Since completing her graduate studies Kim has worked as a freelance sound editor and production sound mixer in Los Angeles and worked as an assistant sound editor, foley artist, foley editor, sound effects editor, supervising sound editor, and re-recording mixer on a variety of films and television shows at Skywalker Sound, a division of Lucasfilm Ltd,⁠⁠
Kim currently resides in the San Francisco Bay Area and continues to work with industry-leading sound editors, sound designers, and re-recording mixers, as well as, filmmakers from around the world. She has had the privilege to work with incredible sound teams for films such as Star Wars: The Force Awakens, Thor: Ragnarok, Captain Marvel, and, most recently, Toy Story 4. ⁠
0 Comments (requires login)