Livewire kicks off with a concert of works by composer Anna Rubin, who retired from UMBC’s music faculty in 2018 after a distinguished career, performed by the Ruckus new music ensemble. Featured works include Dreaming Fire, Tasting Rain; Stolen Gold; and everything goes bee; Taming the Beast; Portal; Hag Riding; and The Memory of Her Voice.

The varied works of Anna Rubin have been heard throughout North America, Europe and Asia from 1978 to the present. Beginning with acoustic composition in traditional forms — solo, chamber, and orchestral works for various ensembles — she has focused more recently on the integration of amplified instruments with live electronics as well as ‘electric stories’ — richly layered narrations embedded in digital sound. The special sounds of Baroque instruments — lute, flute, oboe, recorder and the viola da gamba — have also inspired her to write many works. Her most recent experiments involve composing music that extends the natural and graceful movements of the virtuoso performer ritual and dance.

In addition to two recent awards by the Maryland State Arts Council, she has been honored multiple times by both the Ohio Arts Council and the New York Foundation for the Arts, and named a Fellow of the National Orchestral Association. The Delta Ensemble Gaudeamus Prize was granted to her work De Nacht: Lament for Malcolm X in Holland in 1984. She and co-composer Laurie Hollander were awarded a jury prize by the Aether Festival #1-International Radio Art/Radio Station KUNM, Albuquerque for their piece Family Stories: Sophie, Sally. Her work has been commissioned by several groups, including the New England Foundation for the Arts, the New York State Arts Council, the Northern Ohio Youth Orchestra/Oberlin Choristers/Ohio Ballet Theatre, Cleveland Choral Arts Society, Urban Sky Consort, WNYC, and New American Radio. Soloists such as Thomas Buckner, Marlowe Fisher, F. Gerard Errante, Jeffrey Krieger, E. Michael Richards, Airi Yoshioka, Maria Loos and Isabelle Ganz have commissioned works from her as well. Her work is recorded on the Capstone, Neuma, Sony and SEAMUS labels and she is published by Leisure Planet and AR New Music Publications. 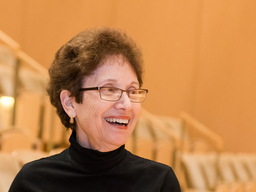